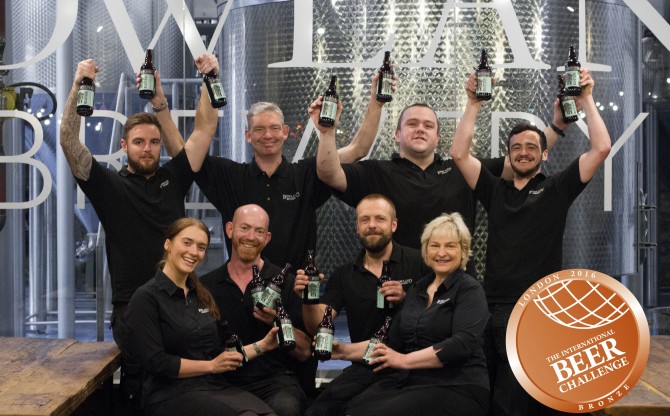 Bowland Brewery is celebrating after winning bronze, silver and gold accolades in some of the industry’s most prestigious awards during the last two weeks.

The brewery, based in Holmes Mill, Clitheroe, and owned by James’ Places, scooped a Bronze for its Buster IPA in the Ales category in the International Beer Challenge – a premier award which attracts entries from more than 30 countries and recognises the skill of the brewer. Judges included retailers, importers, publicans, brewers, writers and flavour analysts plus some highly experienced judges from continental Europe.

Buster IPA is a 4.5 per cent well balanced IPA ale with tropical undertones, developed by Bowland’s craft brewers over the last two years.

Bowland Gold, another artisan ale from the brewery, won a Silver for Standard Bitters and Pale Ales at the North West SIBA (Society of Independent Brewers) North West SIBA Awards.

A hoppy golden bitter filled with grapefruit flavours and aromas, Bowland Gold found favour with the 100 independent craft brewers, beer industry representatives and experienced beer drinkers who judged the event held at the Macron Stadium, Bolton. No less than 260 beers from 50 breweries entered the awards.

Said Bowland Brewery co-owner and md Andrew Warburton: “We’ve always thought our beer was great, it’s nice to know that our peers do too!”

Last week Bowland Brewery, which boasts 5 core ales, 4 seasonals and  7 occasional ales in its repertoire available across the hospitality group’s venues as well as in local pubs and bottled direct to the public, became the first ever winner of the Drink Producer of the Year Award at the Lake District and Lancashire Life  Food and Drink Awards 2016.

The brewery, which recently quadrupled its ale production capacity with its move into Holmes Mill, employs eight people and is currently looking to expand the workforce by a further two.

Andrew said: “We are delighted to be the inaugural winners of this award. It is a great and well deserved accolade for our hard working team.”

James’ Places is currently conducting the £10m redevelopment of Holmes Mill, a previously derelict, former textile mill. As well as the brewery, Holmes Mill houses a Beer Hall, café, bakery and multi-use function room. Further phases of the rejuvenation of the mill will include a hotel and gym.