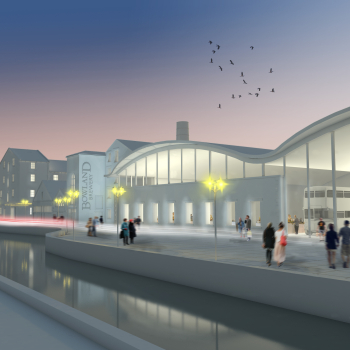 Bowland Brewery is delighted with the news that expansion work can finally begin on their new home, Holmes Mill in Clitheroe.

This ambitious proposal to transform the redundant textile mill into a major leisure and tourism complex was given the green light by Ribble Valley Borough Council on Thursday evening.

James Warburton, Managing Director James’ Places said: “Bowland Brewery is at the very heart of the scheme. In fact if it hadn’t been for the brewery I don’t think I would have ever purchased the mill in the first place.”

The news comes in the nick of time as the first parts of the new brewery plant have already been delivered.

This major investment in the brewery, estimated at approx. £350,000, is needed in order to expand production to keep up with demand.

The new equipment is just part of the story. There will be a Beer Hall, to showcase the brewery’s products, and a few well-known rivals. A multi-function room that one day might be a cinema and the next day a cookery school or exhibition space.

The expansion work to the brewery and Beer Hall is expected to take three months to complete.

The Bakery, Smokehouse and Deli are expected to follow shortly.

The second and third phases of the development will see the creation of a thirty eight bedroom hotel above a bar and restaurant, a gym, pool and urban spa in the former weaving shed.

Work on phases two and three will begin shortly and will take a year to complete.