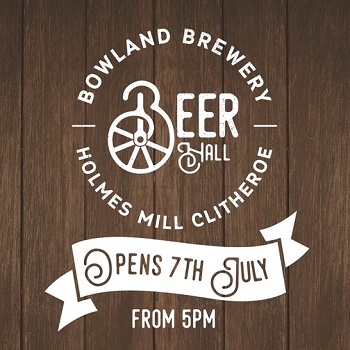 CHEERS! ONE OF BRITAIN’S BIGGEST BARS OPENS IN CLITHEROE

What could be Britain’s longest bar housing 42 artisan hand-pull cask ales opens for business on Thursday July 7 – marking the first phase of the exciting new Holmes Mill development in Clitheroe.

Awaiting official validation as the longest bar in Britain, the giant bar is the focal point of the Beer Hall, which is a showcase and tasting parlour for Bowland Brewery. On tap is the full range of beers from the Bowland Brewery plus interesting regional beers including offerings from Lancaster Brewery, York Brewery and Dark Horse Brewery.

Group marketing manager Heidi Kettle said: “The longest continuous British bar up until now is thought to be the Horseshoe Bar in Glasgow, measuring 104ft and three inches.  Our Beer Hall bar should just sneak the record, but we are waiting for the people from Guinness to get down here with their tape measure before we can say it’s official.”

On this great big bar are 42 hand pull pumps for cask ales including Hen Harrier, with a penny for every pint sold going to the RSPB’s work to protect the bird of prey by the same name. The aim is to always have 24 cask ales on the bar and fridges full of beers in bottles and cans. A showcase for beers of all kinds, from all parts of the country, continent and the rest of the world too.

Said Heidi:  “Customers spoilt for choice can buy the Circumnavigation ticket for pints, halves or thirds to enable drinkers to experiment with something new and different. There will also be an opportunity to leave feedback on beers which will influence our decision to stock them again.”

The Beer Hall menu has been specially designed to complement the ales with certain dishes the perfect accompaniment to particular beers. Featuring a range of ‘beer foods’ from around the world including chilli dogs, jerk chicken and pies.

The Beer Hall is the first phase in a £10million project by hospitality group James’ Places, to bring the previously derelict town centre historic industrial building back to life as a food, drink and leisure hub. It is the ninth venue to be restored and added to the growing portfolio of James’ Places across the Ribble Valley and Forest of Bowland, plus interests on the edge of the Yorkshire Dales.

The mill restoration will also feature a new home for the Bowland Brewery, owned by James’ Places, plus a large function room which can serve as a pop-up cinema as well as hosting music and events, a bakery and ice cream parlour, all expected to be open by the early August.

Subsequent phases of the rejuvenation of Holmes Mill will include a 38 bedroom hotel, gym, pool and urban spa, plus a food hall.

The whole scheme, expected to be finished by the end of 2018, will bring up to 180 new jobs to Clitheroe, providing a welcome boost to the Ribble Valley and Forest of Bowland area.

The surroundings are industrial retro, with many original features retained and former mill materials upcycled where possible – for example, the bar is clad in wooden floor boards from the weaving shed.

Md James Warburton added: “We are hugely excited about the Beer Hall as the first element of the Holmes Mill development to open. The ultimate goal is to create a showcase for the incredible variety and quality of food and drink growers/manufacturers/suppliers in this rather lovely part of the world that we are lucky to call home.”

Initially the Beer Hall is open Fridays-Sundays with plans to open seven days a week from early-August.