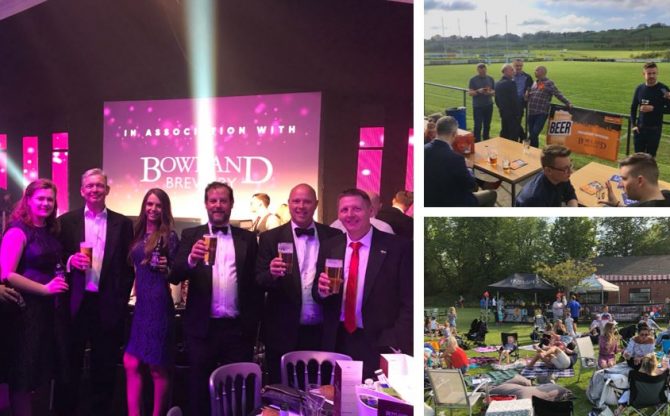 The busy month of May began with a team trip to the Blackburn Beer Festival held at Blackburn Rugby Club for a weekend of glorious sunshine, excellent company and fine beer. Sitting alongside 50 beers from leading independent brewers were seven of the Bowland ales including two of our superb seasonal specials, Spring and Admiral.  We were thrilled that the latest addition to our core range, Boxer Blonde, was the thoroughly enjoyed and was first beer at the festival to sell out!

Boxer Blonde also made a welcomed appearance on the bar at Burnley FC’s Player of the Year Awards sponsored by Bowland Brewery. The evening was a wonderful celebration of the successful season for the Turf Moor based team with goalie Nick Pope taking the top prize, being crowned the Club’s Player of the Year 2018.

Red, White and Blue was the theme at Langho FC as they celebrated the Royal Wedding and the Emirates FC Cup Final. With a BBQ, live music, bouncy castle and the Bowland Bar there was something for everyone.

The Bowland ‘Beer Bus’ ended a busy month at the Edgworth Cricket Club’s Beer Festival where crowds enjoyed a fine selection of beer, prosecco and gin – a perfect way to spend the Bank Holiday!