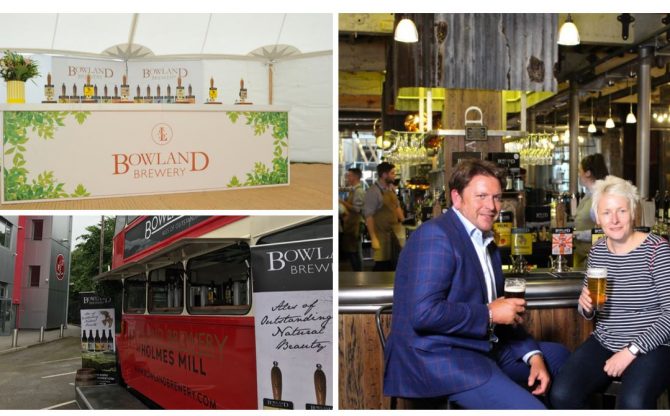 The Bowland ‘Beer bus’ started the month at Fleetwood Town Football Club for Alfie Boe’s Homecoming concert. The incredible evening began with a performance by the sensational Welsh choir, Only Boys Allowed. On the bar and bus, an offering of Bowland’s ales which included the top-flight ale, Hen Harrier and the Boxer Blonde, a refreshing session ale with a gooseberry punch. The two ales down a treat with the concert’s attendees.

Later in June, celebrity chef James Martin, his film crew and Michelin Star Lisa Goodwin-Allen were welcomed to the Holmes Mill site for a day of quality Lancastrian food and drink. The visit included sampling the fine range of local produce available in the Food Hall, a BBQ by the Bistro and a tour with Tony of the Brewery.

As England’s World Cup Campaign began so did another footballing venture for Bowland Brewery. The Brewery’s Managing Director, Warren Bennett, announced an exciting two-year deal with the EVO-STIK League. As the League’s Official cask suppliers, Bowland Brewery will also sponsor the monthly player and manager awards.

The month ended with a visit to Kensington Palace Gardens for the Goffs London Sale. The Brewery was delighted to be the cask sponsor at the fifth annual London Sale hosted in association with QIPCO. The ‘sale like no other’ saw a global audience descend on Kensington Palace Gardens for the afternoon auction. Director of Lifestyle by Lillingston, Robyn Isherwood, extended the invitation to serve the range of premium cask ales at the sale on the eve of the Royal Ascot. Having grown up in the glorious Ribble Valley, Robyn had enjoyed the delights of the Waddington Arms, where Bowland Brewery Director Andrew Warburton was the landlord. Robyn said that “when we were looking for an authentic cask brewery to provide real ale for our guests, Andrew and Bowland Brewery were the obvious choice!”

The Bowland ‘Beer Bus’ will be out and about throughout the summer, stopping next at Clitheroe Crickets T20 on Friday 13th July aboard which will be a selection of Bowland cask ales. Further events include:

The Royal Lancashire Show hosted by the Royal Lancashire Agricultural Society at the Salesbury Hall showground. The event will start on Friday 20th July with a performance by the Red Devils Parachute Team and continue until Sunday 22nd July with fun for all the family including a Children’s Village, Top Level BSJA Show Jumping, the Duck and Dog show, and much more!

The following month the Bowland ‘Beer Bus’ will be returning to the streets of Clitheroe for the annual Food Festival (11th August)– a showcase of local food and drink produce. The Brewery Team will be serving a selection of Bowland cask ales from the bars based in the Bull Ring. The festival will take place throughout the town centre with food and drink stalls lining the streets. Afterwards, head over to Holmes Mill for an evening of live music, pizza from the Emporium Shack and all the offerings of the 105ft bar!