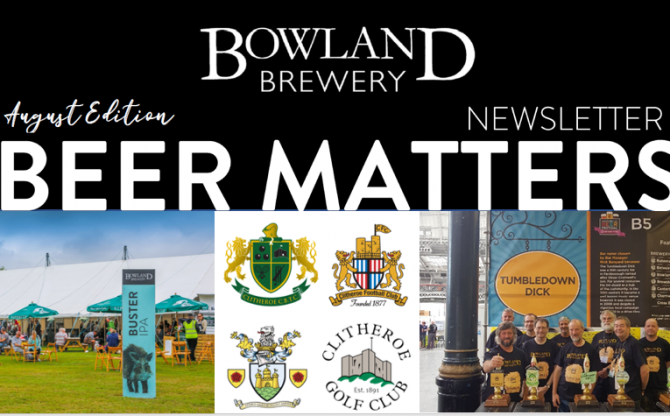 Bowland Brewery is delighted to announce that their cask ales are now available on the bar at the Clitheroe Golf Club making it a full house as Clitheroe ‘s Rugby, Football and Cricket clubs also stock our range.  So, no matter the shape of balls you like to play with there’s a glass of Bowland ale waiting in the Club House when you’ve finished!

The Fourth Walmer Bridge Beer and Banger Festival brought beer lovers flocking to the countryside west of Preston to sample a wide range of lovingly brewed ales. The festival featured four of Bowland Brewery’s favourite ales – Boxer Blonde, Pheasant Plucker, Buster IPA and Hen Harrier. With three days of sizzling sausages, great live music and the support of many sponsors, including Bowland Brewery, the event was able to raise over £12,000 for local charities such as St Catherine’s Hospice, Derian House and Rosemere Cancer Foundation.

A treasure-trove of local food and drink awaits you at Clitheroe Food Festival. Join the Bowland Brewery team at the Bowland Bar in the Bull Ring or the Bowland Beer Bus on the King Street on Saturday 11th August for a pint or two!

Afterwards head over to Holmes Mill for an evening of live music, pizza from the Emporium Shack and sample all the delights of a 105 ft bar!

For a chance to win a night stay at the Spinning Block and a Tour of our Brewery, collect a leaflet from the Bowland Beer Bus or the Bar then post your completed leaflet in the post box at Holmes Mill!

BOWLAND BUMBLE IS OFF TO THE BIG SMOKE!

Bowland Brewery is thrilled that Bumble has been selected as one of the ales at the Great British Beer Festival. The festival hosted by CAMRA is held annually and has been dubbed ‘the ultimate beer festival’ – with over 30 bars under one roof featuring beers from around Britain, Europe and the United States, you can see why!

The Beer Finder will help you find your perfect real ale, craft beer, cider, perry wine or gin. Although if its Bowland Bumble you’re looking for, head over to Bar B5 (beehive… get it!).

The brewing team have been overwhelmed by the positive response to the seasonal range and are delighted that the ales have been so well received.

The new year of beer began with Spring, a 3.5% golden ale with mosaic hops. Spring was an instant hit and the tropical tasting ale brought a smile to those who tried it thanks to its amazing taste and cheerful pump clip! Since Spring we have been inundated with request for the tropical, citrus ale to return and so ‘I’m Baa-ck’ was launched with a festival vibe, featuring at the popular Ribble Valley music festival, Beat-Herder. This perfect summer tipple will be available throughout August.

In June Bowland Brewery marked the start of summer with a pint of Double Deckerdence. The pale session ale is packed with tropical fruity flavours and returns for a third year. A firm favourite, the ale is best enjoyed served from Bowland’s 1967 double decker ‘Beer Bus’ and will be available at the Clitheroe Food Festival next weekend.

Bumble, the latest seasonal to leave the Brewery, will also be available at the festival. This 4.0% blonde ale with a double addition of honey has buzzed out – selling out in a week! A second batch of this delightful lightly hopped ale will be available for delivery from 14th August.

CLARE AT THE GAME FAIR

Clare Brownlow, the talented artist who created the unmistakable Bowland creatures featured on our pump clips took a selection of bottled ales to the Game Fair. Clare, a Scottish based artist, has become incredibly well known for her unique style, painting with pheasant’s feathers and ink. Her work has been exhibited all over the world including LA, New York, Singapore, Hong Kong, London, and, of course our home, Holmes Mill!

The gundogs took centre stage with a string of top competitions, demonstrations and Have a Go opportunities. Whilst in the Countryman’s Mini Ring, an entertaining, educational and hilarious look at the British Countryside

For the second year running Bowland Brewery was pleased to support the Royal Lancashire Agricultural Show.  The 2018 show returned to the picturesque Salesbury Hall Showground nestled in the rolling hills of the Ribble Valley.

A larger affair than in previous years, the move back to the historic July dates also saw the return of the livestock exhibits. Competition was strong as proud owners and breeders flocked to the sheep and cattle rings beside the Bowland Beer Tent in search of the coveted champion titles.  Over in the Bowland Brewery ring, the light horse winners were festooned in rosettes and sashes with red rose centres!

Celebrations continued well into the evening in the Bowland beer Tent with impromptu sets by the Jelly Roll Jazz and Blues Band and the Accrington Pipe Band!  The Bar offered a taste of the Bowland Beer Hall with a selection of cider, lager and cask ales.  Back by popular demand the ‘Spring’ ale, a 3.5% golden malty ale with mosaic hops, was re-launched as “I’m Baa-ck”.  The citrus flavoured ale went down a storm and was even enjoyed by Stuart Barnes from the Dancing Sheep Show!

A pint or two of our top-flight ale, Hen Harrier was the perfect accompaniment for watching the raptor display in the main ring.   The birds showed off their incredible agility and strength leaving the audience amazed.  Over the weekend visitors also enjoyed the spectacular Shetland Pony Grand National, the exhilarating Flyin’ Ryan Motorcycle Stunt Show and the Red Devils Parachute Team.  The county’s Royal show celebrated the very best of Lancashire with celebrity chef demonstrations, a treasure trove of gifts and a helping of fine food, drink and, of course, Bowland Ales!

KEEP IN TOUCH
Join the Beer Club to keep up to date on new events from the Brewery and the Bowland Beer Hall!