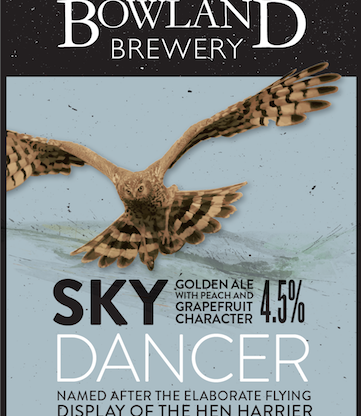 An elusive ale is making a rare appearance on the bar at Bowland Beer Hall as part of Holmes Mill’s #Tryanuary campaign.

Bowland Sky Dancer is named after the spectacular courtship flight of the male hen harrier as it seeks a mate on the wing.

Similar in style to the brewery’s flagship Hen Harrier ale, at 4.5% ABV, Sky Dancer is slightly stronger, sweeter and more rounded than its sibling.

On the palate, the natural hoppiness of this golden ale is still to the fore, but the extra strength makes the sweet, almost tropical notes of peach and grapefruit more prominent.

Rather like the elusive raptor after which it is named, this rare, limited edition brew is made only in small batches on an ad hoc basis. The latest release is part of the brewery’s #Tryanuary campaign.

Bowland Brewery and Bowland Beer Hall have joined forces to back the nationwide Tryanuary Campaign – which aims to support small independent breweries and local pubs across the UK.

The campaign encourages real ale fans to take a break from their usual tipples to seek out and sample different beers in new venues they haven’t visited before.

Bowland Brewery general manager Craig Hall said: “The New Year is a great time to make changes and try something new, so why not make an enjoyable New Year’s resolution you’ll actually keep by trying a few different brews during January?

“As well as our core range of premium cask ales like Hen Harrier, Boxer Blonde and Pheasant Plucker, look out for Sky Dancer on tap in the Bowland Beer Hall this month.”

Watch out for regular updates on the Holmes Mill social media accounts #NewBeerThursday or sign up to the Bowland Beer Club for the heads-up direct to your inbox.