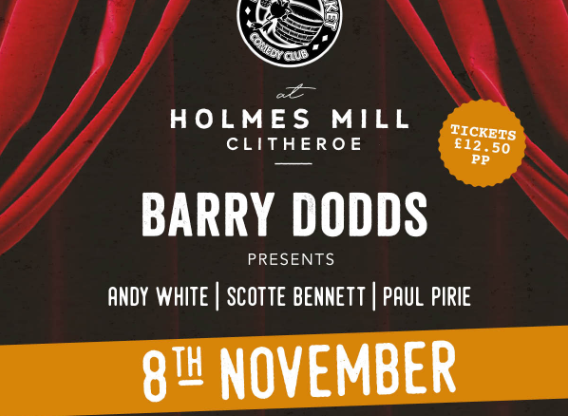 We are very excited to be working with Manchester’s Frog and Bucket Comedy Club to bring you another night of fantastic comedy! The comedians joining us will be as follows:

Barry has won best MC at the 2017  Midands Comedy Awards and has been seen on BBC 2 show Hebburn in 2012. He was also a finalist in Jimmy Carr’s comedy Idol and featured on ITV for stand up Britain and Take the Mic in 2005.

Andy White is An energetic, confident and silly Brummie who combines silly voices and a mad afro to devastating comic effect. Andy has numerous media appearances, including the BBC New Comedy Awards on BBC Choice, Brand Spanking New on BBC Radio 7 and his winning performance on the Weakest Link comedian’s special! His appearance on the BBC quiz show featured in his five star Edinburgh show, ‘It Started With A Quiz’ in 2007. This followed on from his well-received one-man show at the 2005 Leicester Comedy Festival: Young, Gifted and Beige.

Last year Scott supported Rob Brydon on tour, As well as working as a successful stand up comic in his own right, Scott has written for high profile acts including Jason Manford, is a writer for The Chris Ramsey show for Comedy Central and has written for the News Quiz on BBC Radio 4.