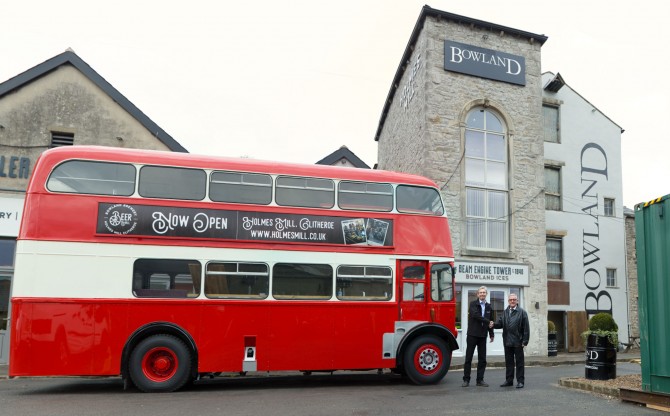 Bowland Brewery’s eyecatching Bus – a 69-year-old red double decker – has had a smart new respray as it moves to a new home at Clitheroe’s Holmes Mill.

The British Leyland bus, which is a purpose fitted-out mobile bar serving the full range of Bowland Brewery ales, plus general drinks, was built in 1947, so when it needed some TLC, specialists were required.

The bus went to Blackburn family-run business Bus and Coach World ahead of its move to Holmes Mill, the home of Bowland Brewery, which is undergoing a £10m redevelopment.

The bus, which doubles as a bar and is available to hire for festivals, weddings, parties and all occasions, has been given a beautiful new paint job by the experienced team led by Phillip Hilton MBE and his son, Robert.

Philip first starting working with hand built buses like this in 1960 as an apprentice with the East Lancashire Coachbuilders company in Blackburn. Having this project in his workshop was a reminder of days gone by when lots of similar vehicles were on the roads.

He said: “It was nostalgic to see an old bus like that in the workshop, it brought back a lot of memories. We don’t see many vintage buses like this these days so it is a real privilege to work on it.”

Phillip learnt his trade over 40 years at East Lancashire Coachbuilders, working his way up from the drawing office via head of purchasing to managing director before retiring. He took a break, then started his own business with his son and a former colleague and they now employ 35 staff.

Andrew Warburton, MD of Bowland Brewery, said: “With Phillip and the team at Coach and Bus World we knew our beloved Bowland Bus would be in safe hands. They have done a fantastic job and the bus looks as good as new.”