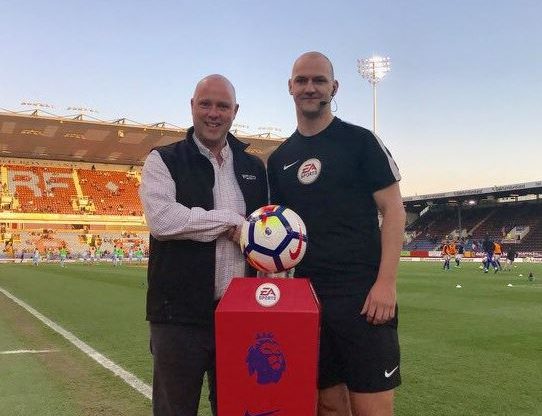 Bowland Brewery were proud sponsors of the match ball for Burnley FC’s midweek encounter with Chelsea at Turf Moor.

With just two places, 8pts and £550 million of big name players separating the two teams in the Prem, the result could determine whether Burnley play in the Europa League next season.

Managing director Warren Bennett handed over the match ball to referee Bobby Madley while the Chelsea Squad warmed up before the game on a balmy spring evening at Turf Moor, which saw the Fanzone – sponsored by Bowland Brewery – buzzing from late afternoon onwards.

Burnley conceded an unfortunate goal to the visitors in the first half but mounted a spirited fightback against classy opposition. The Clarets snatched an equaliser courtesy of Johann Berg Gudmundsson / Ashley Barnes in the second half, but Chelsea striker Victor Moses sealed a Chelsea Victory with a clinical winner in the 70th minute.

After the game, Man of the Match Gudmundsson handed the match ball back to brewery office manager Natalie Walsh.

The brewery team is looking forward to returning to Turf Moor next month for the Player of the Year Awards, which Bowland Brewery is also sponsoring.